This is one of the photographs in our collection. It was made in Whanganui, Whanganui Region, New Zealand in 1980.
See full details

About the Work
This is a rear view of the former photographic studio located at 128 Victoria Avenue Whanganui, taken from Watt Street at the rear. The premises were purpose-built for photographer Frank Denton who occupied it from 1911-1927. The studio was distinctive because it had a small third floor tower-like room designed for daylight printing (visible in this image).
In 1927 Denton sold his studio and the business to Mark Lampe (who had already established Tesla Studios in 1908 in Ridgway Street). The business was renamed Tesla-Denton Studios.
In 1932-1933 the premises were purchased by photographer Thomas Metcalfe who established his own business there (Lampe's business reverted to Tesla Studios).
In 1967 Metcalfe sold the business to James White and John Bourne who traded as Wybon Studios. Remnants of the 'Wybon Ltd' signage is visible on the rear façade in this image. John Bourne moved into photographic retail and Huge Perry joined James White in a short partnership before James White moved to join Bill Lindberg in Hamilton (then finally settled in Napier). Hugh Perry continued to run the studio for a short time before moving the Christchurch in 1973 (to be photographer for the Presbyterian Church), he sold the business to John Souter, who eventually left the building for other premises on Victoria Avenue.
In 1989, after a fire in the adjacent building which weakened the structure, the studio at 128 Victoria Avenue was demolished.
Ref: Peter Ireland, Frank Denton Photographer in Time of Transition, 2003 and Hugh Perry, Towards 75 Years of Organisition of Professional Photography: The NZ Institute of Professional Photography Story, 2018.

Description
Image of Frank Denton's former purpose-built studio located at 128 Victoria Avenue. This building was demolished in 1989 after fire damage in a building next door weakened the structure. Image shows the rear of the building and the small tower-like room designed for daylight printing. An external staircase provides access to the first floor. The building is clad in corrugated iron. Remnants of a former inhabitant's signage is still visible on the rear façade - 'Wybon Ltd' from Wybon Studios (circa 1967-1973) 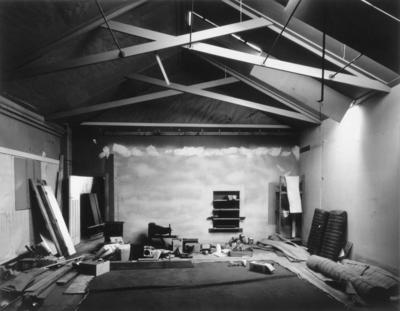