This is one of the paintings in our collection. It was made in New Zealand in circa 1911.
Measurements
Image: 260 x 204mm

Description
Roger Blackley has written that Goldie thought of his subjects as "representing 'types', in the sense of 'specimens' that required collecting before it was too late." The view that Māori were facing extinction was prevalent in the early years of the twentieth century, although it is interesting to note that Goldie's own brother, William, had analysed the 1901 census returns and published an article contradicting such a view.
There was a close collaboration between Goldie and his models. He paid his sitters on a daily rate and sometimes covered the cost of their accommodation if they came to his studio from outside Auckland.
They invariably sat for him draped in a blanket or piece of velvet supplied by the artist. In many of his portraits the identical tiki pounamu appears around the necks of both male and female sitters. Wiripine Ninia wears one here.
His portraits were well-known as the result of reproductions in the illustrated press. Some were printed on special art paper and were framed for hanging in homes. The realism of the paintings always found favour with the public, though art critics increasingly found the works too photographic and lacking in 'artistic fancy'. PS

Ngatiawa rangatira Wiripine Ninia appears in this painting in European clothing, unlike her appearance in a later Goldie portrait entitled One ofthe Old School. The deep lines of Wiripine's face and the muted colours of her clothing blend well with the raupo thatched wall immediately behind her. She wears the same taonga in both paintings; indeed for many of us Māori, Wiripine herself is taonga, an emblem of our cultural sustainability. This connection between taonga and mana-a-iwi is consistent with the inter-relatedness of all themes within this exhibition.

Those of us who identify as Māori, particularly of the iwi Ngatiawa, may 'converse' with Wiripine Ninia, seeking her guidance and also the solace that comes from the connection she helps us to make with the world of our ancestors. In spite of many criticisms that Goldie's work attracts, particularly about its narrative clichés, he does Māori people a service. The pictorial record of our tupuna replenishes ancestral ties with the past that are valued so highly in Māori culture. Wiripine's quiet dignity is reflected in her inward, reflective gaze. In it we can discern both the mana and humility of our people, handed down to us through generations. Rather than essentialising Māori people, however, it serves to remind us all, Māori and Pakeha, that we may not have that same humility and mana until we reach our older years. JD
(from Te Huringa text, http://www.fletchercollection.co.nz/exhibition/turning-points/category1/cfgoldie-2.php) 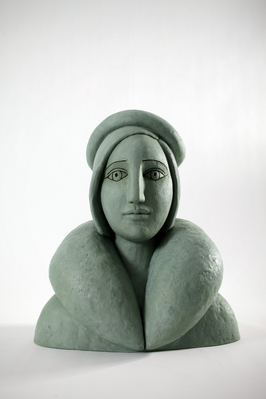