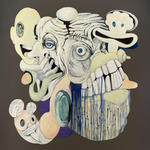 This is one of the painting assemblages in our collection. It was made in Wellington, Wellington Region, New Zealand in circa 2013.
See full details

About the Work
A work from the Planethead Series.
The idea for the Planetheads first came about when McLeod worked on an installation for the large feature wall at Tauranga Art Gallery in 2012-2013. While he originally intended there to be nine Planetheads (in reference to each planet in the solar system) as the series progressed it became complete at just seven. As an exercise in paint handling and a break from his other work at the time, McLeod stated that he really enjoyed working on the series and that “A head is not a difficult proposition…unless it is a portrait…of an individual. That’s another set of problems.” During the working process the artist names (referred to in the titles) became ‘attached’ to the work, whether through the use of paint or colour, or anything that would jog a memory or obscure connection with the featured artist.
In Robert McLeod's words regarding the series "They were deliberately large works with the subject matter worked out beforehand. That left me free to enjoy the paint and the painting process. Janet... it was the odd face... nothing to do with the artist except I always thought her name strange. As is McLeod when translated into English. ... Nothing against Janet."
Jennifer Taylor Moore, Curator of Collections, Sarjeant Gallery for the exhibition Collection Focus: Robert McLeod, May-Sep 2019

Media
oil and enamel on plywood

Description
Part of the Planethead Series. Shaped plywood painted panel showing a large head with other smaller heads, skin folds and wrinkles. The main head has a large chin and teeth with blue paint drips between the teeth. Mainly painted in whites and creams with a few fleshy tones and blue paint drips. 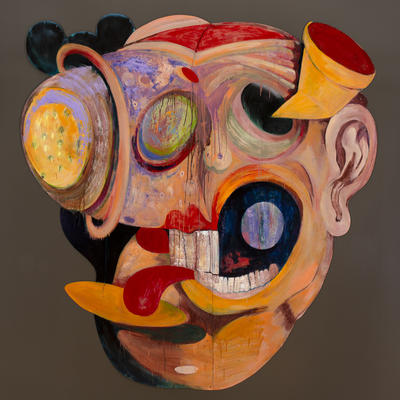 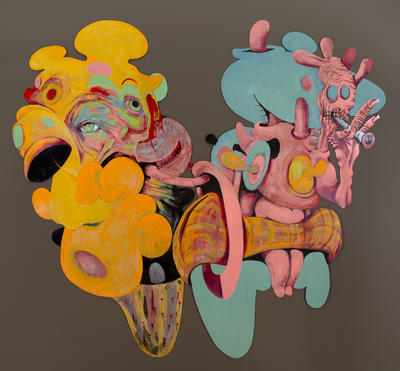