Letter to EMC written by her mother Eliza Collier April 16 1916.

This is one of the letters in our collection. It was made in 16 Apr 1916. The place where it was made is unknown.
See full details

About the Work
TRANSCRIPTION:
St Johns
April 16th / 16
My Dear Edith
I have just received your letter where you had received the shock through Harry not arriving. I felt for you keenly it must have been awfully disappointing to you, but we are quite sure now it was for the best that he stayed behind to go to the school he is now in as the weather is so favourable in our lovely climate
We had a letter from him today and he was delighted that he had been up in the skies and what a pleasing sensation it was, he will be telling you all about it
It seems as though it is going to take on with our young men – There are so many joining – I just heard this morning of Marjorie’s Sutherlands brother & several others from [illeg.] joining.
We were amused at your cable asking to stay till Sept. I felt a bit disappointed as we were looking for your coming shortly now it will be about Xmas before you get here, of course there will be a great deal of [illeg.] to get the [illeg.] going, so that it will come hard on fathers purse to have to find cheques for two of you, also for Reg although they get their pay from Government it doesn’t seem sufficient to keep a Collier going. Thea will have told you in her newsy letter that we are expecting him home this week for his first & final leave, I want to go to the camp to see him after he goes back, rather than go to Wellington to bid good bye, Im [sic] sure I couldn’t it must be heart breaking. We have been hearing so much about the trials & sufferings of the men in Egypt from one of our Chaplins [?] who is back here for a week or two from the front. Last friday Mr MacMillian motored him ([illeg.] Mr & Mrs Blauires & myself) out to Maungaraupi to dinner & afternoon tea we had a lovely day and all enjoyed their outing, so you see Vera is quite coming out she is having a great number of visitors, she sang several songs & played the paino [piano] player for them
Reg sent us a note to say that we were to have roast turkey ready with plenty of stuffing in it – on [illeg.] they are so tired of the food they get in camp, I am telling Reg we are expecting great things from him as everybody is telling him how like he is to “Admiral Jelico” our great sea commander.
I cant [sic] find your last letter to answer any questions, but you were going up for your exam later on, which I hope you passed with merit.
I have got Harrys letter to write so will close with much love
from your loving mother
P.S. Grandma seems much concerned that you have not written to her, we asked her if she had received a little present from you that you mentioned sending her, and she had not she thinks it has gone to the bottom of the sea. I will send you some money that you are to spend on little keepsakes for friends out here I will give you a list sometime

This record represents an archive item and has related works.
Measurements
264 x 203mm

Letter to EMC written by her mother Eliza Collier April 16 1916. 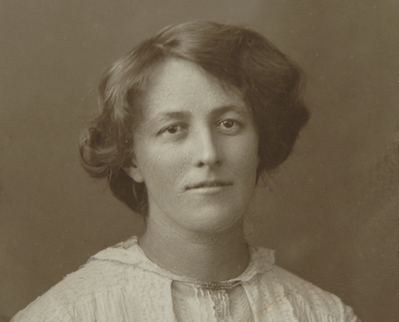