Biography
The Evening Post was founded by Henry Blundell and began publication as a daily in Wellington on 8 February 1865. Blundell was born in Dublin in 1813 and worked for nearly 30 years at the Dublin Evening Mail. In 1860 he migrated with his family to Melbourne. Blundell moved to New Zealand in 1863 and worked on the Otago Daily Times.

In 1864 he founded the Havelock Mail. However the Marlborough goldfields were failing at this time and the Mail only lasted a few months, closing in November the same year. Blundell, business partner David Curle, and Blundell’s two sons, John and Henry, then decided to try their luck in Wellington, which at that time did not have a daily newspaper.

Wellington had just become the colony’s capital and the Blundells decided that this, combined with the state of the other newspapers being published in Wellington at the time, made starting a daily newspaper there a sound business proposition. The only rivals to the Post were the tri-weekly Wellington Independent and the New Zealand Advertiser, and the weekly New Zealand Spectator, which was in poor health and closed in August 1865.

There was therefore a strong opportunity for a daily paper in Wellington.The Post was a family business, with father Henry being manager and principal leader writer, and sons Henry junior, John and Louis, who joined the firm on completing his schooling in Dunedin, being typesetters, canvassers and reporters.

The new paper aimed to record every event ‘within a mile of Martin’s fountain’ which lay at the corner of Featherston Street and Lambton Quay. By focussing on local issues, attention to detail and high-quality writing the Post soon established itself as the leading Wellington paper, a position it did not relinquish during its long career. Its editorial policy was politically neutral. Unlike other papers of the time, which were established to publicise a particular political opinion, the Post was not aligned to any political factions and was therefore able to comment freely on political and other matters. As Blundell wrote in the Post’s first edition, ‘a liberal course of policy will be pursued and the bounds of moderation will not be overstepped in giving expression to the views entertained by the proprietors as journalists.’

Henry Blundell senior died in 1878 and the paper continued to be run by his sons, with Frank Gifford as editor. Perhaps because it was such a locally focussed paper-Wellington’s paper-the Post was able to outlast it various rivals over the years. The Post’s only serious competition was the Dominion, which began publication in September 1907. The Dominion was founded to be the voice of the conservative element in Wellington politics, and as such was at the opposite end of the political spectrum to the Post. This, combined with the fact that the Dominion was a morning rather than an evening paper, meant that serious competition with the Post was not an issue as each had its own niche in the capital city. The Blundell family retained control of the paper until the late 1960s. The 1970s saw a steady decline in the Post’s circulation and the Dominion, which had been somewhat in the Post’s shadow throughout its career, gradually eclipsed its rival. In 1972 ownership of the Post was combined with the Dominion and in 2002 the Post’s owners decided to close the paper and merge it with the Dominion to create the Dominion Post. The final edition of the Evening Post was published on 6 July 2002, ending what has been called a 137-year love affair with Wellington.
[Papers Past] 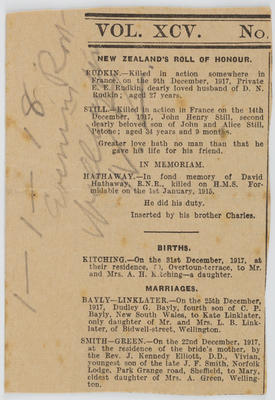