Biography
The Dominion was launched on the first Dominion Day, September 26, 1907, with the specific purpose of providing a strong conservative voice in the capital where the other morning paper, the New Zealand Times, was poorly run and had a Liberal Party heritage, and the much stronger Evening Post was more interested in business than party politics.

When the morning daily was launched just a year after Richard John Seddon’s death, the Liberals had been in power for 16 years and would be for another five. However, under Sir Joseph Ward, the party was in decline while the Dominion’s directors and shareholders were an impressive list of leading conservative MPs and substantial Canterbury, Hawke’s Bay and Wairarapa runholders. Of particular concern to them were the Liberal policies on labour laws, pensions and land tenure, including the break-up of large rural estates. Unsurprisingly, the newspaper was a persuasive promoter of William Massey’s Reform Party and its policies.

The first editor – and he held that position, except for three years in the 1930s, until 1950 – was Charles Westwood Earle. He was also the newspaper company’s managing-director for much of the period and well-attuned to the singular requirements of his Wellington Publishing Company board. While landowner interests were pushed and ‘labour agitators’ attacked, the newspaper also supported good working conditions and backed free education. More predictably, the Dominion promoted free trade within the British Empire, sat on the fence over liquor issues, and advocated a ‘white NZ’ immigration policy. From the beginning, the newspaper’s ambitions stretched well beyond the urban confines of Wellington. There was a strong emphasis on farming news to attract readers in the Wairarapa, Manawatu and Hawke’s Bay, with correspondents in Masterton, Palmerston North and Hastings. The paper’s initial circulation of 2,600 had risen to 20,500 by 1914.

By 1927, the Wellington Publishing Company was in a strong enough position to buy and close down the New Zealand Times. A year later it moved into the impressive, purpose-built six-storey building in Mercer Street that it occupied until 1970.

Over the decades, the Dominion’s political stance slowly modified. Shocked by Labour’s 1935 election win, the paper congratulated the new prime minister Michael Joseph Savage but was soon vigorously attacking the government’s ‘socialist’ policies. The hostility of the Dominion and other newspapers led to the launching of the Labour Party’s own daily newspaper, the Southern Cross, in Wellington. It was the first morning opposition to the Dominion – in both political and circulation terms – since the closure of the New Zealand Times. In 1959, eight years after the Southern Cross had closed, Wellington Publishing Company directors reaffirmed their support for the monarchy and British traditions, freedom of speech and private enterprise, but conceded there might be occasions ‘where the need for state interference was clearly shown’. There was now no direct link to any political party.

In the 1960s, the Dominion supported New Zealand’s involvement in the Vietnam War, but also joined with environmentalists in opposing the raising of Lake Manapouri. The paper introduced front page news in 1963 and pioneered the use of bylines by journalists. Between 1968-1972 it was published as a tabloid before reverting to a broadsheet format.

In 1964, Lord Thomson’s attempt to buy the Wellington Publishing Company triggered a takeover war, with Australian publisher Rupert Murdoch the ultimate beneficiary. The 1965 Media Ownership Act limited ownership of New Zealand media companies to 20 percent, but Murdoch’s share gradually increased to 49 percent – giving his News Corporation effective control – after the legislation was repealed in 1974. In 1972, when the companies owning the Dominion and rival Evening Post merged, the resulting Independent Newspapers Ltd (INL) grew rapidly through a succession of takeovers to become one of two dominant media companies in New Zealand.

In July 2002, INL’s two Wellington newspapers merged to become the morning Dominion-Post. The next year, Fairfax Media, the Australian media conglomerate, purchased, for $1 billion, most of the publishing interests of INL, including the Dominion-Post.
[Papers Past] 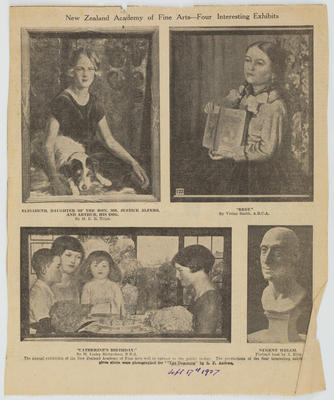