Marcus Adams devoted 50 years to the photography of children and
became internationally acclaimed for his portraits. He was born in
1875, the son of Walton Adams (1842-1934), a photographer
associated with early developments in photography and whose sitters
had included Queen Victoria. He attended York House School in
Reading until the age of 15 and went on to study at the Reading
College of Art, before becoming apprenticed to his father in 1892. In
1904 Adams married Lily Maud Farr, and in 1906 their only child,
Gilbert, was born. Gilbert Adams was also to become a successful
photographer and in 1953 directed the lighting in Westminster Abbey
for the Coronation of Queen Elizabeth II.
By the early 1900s Marcus Adams was undertaking all types of
photographic work. He worked for Charles Keyser, a writer on
architecture and archaeology, and travelled around the country taking
hundreds of photographs to illustrate Keyser’s publications. He also
took many photographs in and around Reading, and was frequently commissioned to record special events. In March 1918 he photographed the visit of King George V and Queen Mary to the local Suttons Seed Factory.
Adams soon established a reputation for his portraiture. Around 1910 he had been commissioned to photograph Sir Rufus Isaacs, the Liberal MP for Reading. The portrait was so well received that he was subsequently asked to photograph the Prime Minister, H.H. Asquith, and the Chancellor of the Exchequer, David Lloyd George. It was his photography of younger sitters, however, that Adams began to pursue above all else.
Following the outbreak of the First World War, Adams was called up for war work for the RoyalFlying Corps in South Kensington, London. During this period he spent much of his spare time at The Camera Club. Founded in London in 1885, this remains one of the most distinguished photographic societies in the world. It was there that Adams met other photographers, including Bertram Park, an up-and-coming society photographer.
In 1919 Park wrote to Adams to propose a business partnership, suggesting that Adams open a Children’s Studio at Park’s premises in Dover Street, Mayfair, which he shared with photographer Yvonne Gregory. Adams would take over the photography of children, enabling Park and Gregory to concentrate on adult sittings. Adams was delighted with the proposal and became the third photographer of considerable distinction to be based at that address – the three photographers were sometimes referred to as the ‘Trinity of Dover Street’.
The Children’s Studio opened in 1920 and was an immediate success. Adams’ high-profile clients did much to guarantee the studio’s success. His sitters included the children of A.A. Milne and Agatha Christie, as well as the Princesses Elizabeth and Margaret. Adams also lectured widely
and exhibited regularly, often to great critical acclaim. He held numerous professional appointments, including Honorary Fellow of the Royal Photographic Society and President of the Photographers’ Professional Association.
During the Second World War the number of portrait commissions declined dramatically. At one point The Children’s Studio closed altogether, because so many children had been evacuated from London. In response, Adams built a portable camera, which enabled him to travel around the
country to photograph his young sitters at home. Bookings at The Children’s Studio never recovered to their pre-war level, and Adams’ health, as well as his relationship with Park, began to deteriorate. Adams’ final sitting at 43 Dover Street was on 7 February 1958 and he died the
following year aged 84. 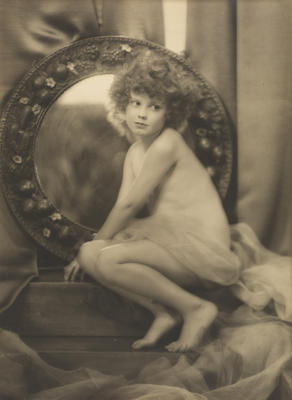