Biography
Sir Edward Burne-Jones was a painter, illustrator and designer associated with the second phase of the Pre-Raphaelite movement. The Pre-Raphaelite Brotherhood were a group of English painters and poets who professed to see a greater sincerity in art. They admired the sentimentality in the paintings found in Florence and Sienna prior to the deemed “pompous posturing of Raphael” as portrayed in his Transfiguration of 1520. The later phase of the Pre-Raphaelites is characterised by a dependency on obscure symbolism, which was prefered over the expressiveness of paint.

At Exeter College, Oxford he met fellow theology student William Morris who stimulated Burne-Jones’ interest in art. He then met Dante Gabriel Rossetti, one of the founding members of the Pre-Raphaelites, to whom he became an apprentice in 1856.
From exhibition label for "Lord Leverhulme's gifts" 2001 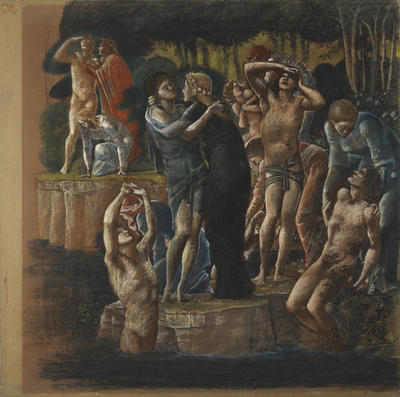