Biography
"Yevonde's mantra was 'Be original or die'- and she was highly original. A dynamic artist and a consummate businesswoman, she posses an eye for detail and positvely delighted in the challenge of new processes, paritcularly that of colour photogrpahy. Her extravagant use of colour and symbolism, with surrealist flair, can be seen in her famous 'Goddesses' a series of portraits of society beauties inspired by the Charity Olympian ball held at Claridges in 1935..."
From Liz Rideal, "Self portraits" in "National Portrait Gallery: Insights". Pub by National Portrait Gallery, London, 2005. pg 74.

"Madame Yevonde was the professional name of Yevonde Cumbers, who was born in Streatham, south London in 1893 to a prosperous family. She enjoyed a childhood full of visits to the theatre, costume parties and a busy social calendar. When she was sixteen Yevonde was sent to a convent school in Belgium and bored with her studies discovered the Suffragette Movement, which was to become one of the greatest passions of her life. On her return to Britain she initially threw herself into working for the movement but soon realised that she lacked sufficient strength of will to devote her life to the cause although she was convinced that 'to be independent was the greatest thing in life' and set out to find a career which would provide her with complete financial and professional independence. Inspired by a newspaper advertisement for an assistant in a top London photographic studio she decided, aged seventeen, to become a photographer. Indicative of the role that photography would play later in her life, she rejected an opportunity to work with Lena Connell, the veteran photographer of the Suffragette Movement, favouring instead the leading society photographer of the day, Lallie Charles.

Yevonde worked in Lallie Charles's Curzon Street studio for a year, learning how to handle aristocratic and sophisticated clients, constructing fictional worlds of glamour and beauty to satisfy their desires. She was now eager for more practical experience and was transferred to 'the Works', where she learnt how to spot and retouch prints.

In 1914, realising that Lallie Charles's heyday was over and that her romantic Edwardian treatment of women as submissive objects of beauty no longer reflected the new aspirations of women, Yevonde decided to set up on her own. She persuaded her father to provide the capital and rented an inexpensive studio in Victoria, working under the title 'Madame Yevonde - Portrait Photographer'. She understood the time was right to create a more contemporary approach to studio portraiture, with a variety of poses and backgrounds and the business flourished despite rival competition.

Madame Yevonde Be Original or Die, The British Council 1998"
Accessed 31/1/13 from http://collection.britishcouncil.org/artist/artist/5/17933/object/0 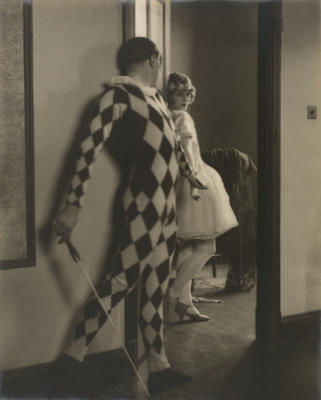