Biography
English painter and etcher. The son of a Norwich hairdresser and haberdasher, Cotman received his early education at the local Gammar school as a ‘freeplacer’. He moved to London in 1798, where he was employed as an assistant to the publisher Rudolph Ackermann. The following year he joined Dr Monro’s ‘Academy’, which had previously been frequented by the watercolour artists J.M.W. Turner and Thomas Girtin. Between 1800 and 1805 he made a number of sketching tours in England and Wales. Theses were to have a profound influence on his subsequent work. In 1806 he returned to Norwich, where he established a ‘School for Drawing and Design’. Three years later he opened a circulating library of drawings for pupils to copy and learn the ‘Cotman’ style. Two of his children, Ann *1812-62) and Miles Edmund (1810-58), would later supply drawings for his pupils to copy. In 1810 he was elected vice-president of the Norwich Society of Artists and its president the following year. He exhibited at the Royal Academy between 1800 and 1806 and at the Associated Artists in Watercolours and British Institution in 1810.
From the Victoria and Albert Museum website. 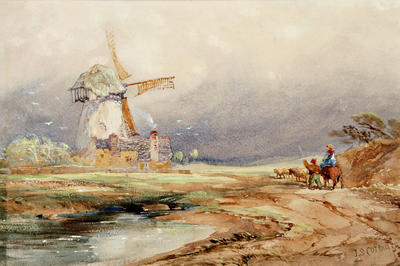