Biography
James Nairn was born near Glasgow, in Scotland, in 1859. He studied at the Glasgow School of Art before enrolling as a student at the Académie Julian in Paris.
Nairn associated with the ‘Glasgow Boys’, a group of young Scottish painters who worked in a naturalist-realist style that was inspired by the work of French artist Jules Bastien-Lepage. Other important influences on the group were members of the Barbizon school, including Gustave Courbet.
During the 1880s Nairn exhibited at the Glasgow Institute of Fine Arts, the Royal Scottish Academy, and had a painting purchased by the Glasgow City Art Gallery. He was an active member of the Glasgow Art Club, an informal group of painters who set up in opposition to the Royal Scottish Academy in Edinburgh, challenging their conservative values.
Ill health prompted Nairn’s decision to emigrate to New Zealand in 1890. After a period in Dunedin he settled in Wellington and in 1891 was appointed as an art instructor at the Wellington Technical School. He proved to be an excellent and popular teacher.
Nairn painted a large number of impressions of Wellington Harbour, including views such as Evans Bay. These small landscapes show Nairn’s interest in the effects of light, and the influence of Impressionism on his work.
Nairn’s paintings began to influence other New Zealand artists. He was elected to the Council of the New Zealand Academy of Fine Arts, and for a time was its vice-president. However, because he believed artists had little say in the running of the Academy, Nairn and some followers formed the Wellington Art Club. They met regularly at Nairn’s ‘Pumpkin Cottage’ near Silverstream, north of Wellington, and the cottage became an informal headquarters for the city’s artists.
Nairn painted extensively in the Hutt Valley area around his Pumpkin Cottage, especially in the last ten years of his life. Although better known as a landscape painter, Nairn painted a number of portraits, and introduced controversial nude life-drawing classes at the Wellington School of Design. He worked in oils, watercolours, pastels and charcoal.
Nairn was an enthusiast of the en plein air technique of painting. This meant he would paint and sketch outside, in all sorts of weather, in an endeavour to faithfully capture the effects of light and weather. This practice ultimately led to his death in 1904 – after sketching near Motueka he caught a chill, and after a brief illness, died.
http://collections.tepapa.govt.nz/theme.aspx?irn=940 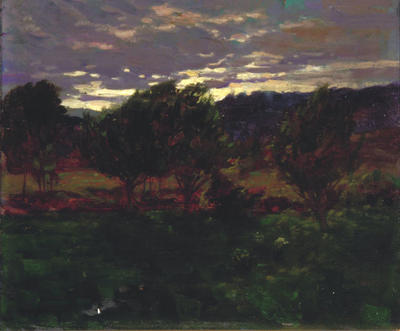 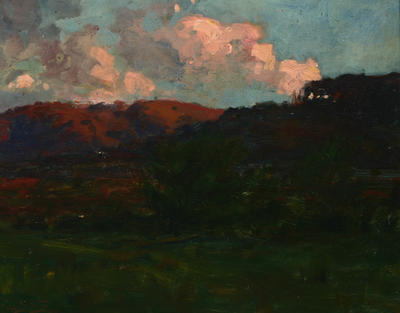 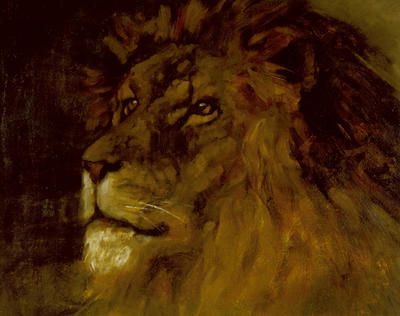