Biography
Cedric Savage was born in Christchurch in 1901. He studied sculpture and modelling at the Canterbury School of Art for two years before enrolling in life drawing classes under Sydney Lough Thompson and Archibald Nicholl.

Initially, Savage worked as a designer and modeller on the Parliament Buildings in Wellington and then moved to Sydney to work on St Mary’s Catholic Cathedral and the State Theatre. During the late 1920s and early 1930s Savage traveled through the Pacific islands where he began painting and on his return to New Zealand he was awarded a solo exhibition in Dunedin, 1933. The works that he completed during this period were accepted for Art Society shows in Auckland, Christchurch and Dunedin.

In June 1933 Savage was elected to be Vice President of the New Zealand Society of Artists. At this time Savage was living in Christchurch, teaching art classes . In 1935 Savage returned to Sydney where he exhibited with the Younger Group, the Society of Artists and also held a solo show at the Fine Arts Gallery. After serving in the New Zealand Armed Forces, Savage sustained an eye injury, which forced him thereafter to paint out of doors.

In 1945 Savage settled in Nelson, building a house at Motupipi, which became both his base and inspiration for numerous paintings that focus on the surrounding landscape. Savage’s painting reputation developed throughout the 1940s with his works often selling first from the Academy exhibitions. Throughout the 1950s Savage continued to hold solo exhibitions throughout New Zealand with a show at the Bishop Suter Gallery in 1953, while continuing to exhibit with the New Zealand Academy and Canterbury Society of Arts. From 1945-53 he was a council member for the Academy and on the committee of management for the National Art Gallery.

Savage was critical of reaction to his work – “I am completely alone, a suspect in the art world. For I openly will not accept the oblivion into which the controlling abstract crowd try to force me … But then too there is little good work by what should be the traditional school.”

Savage subsequently left New Zealand for Europe in 1955 in order to paint free of judgement, traveling and painting in the Baleric Islands, Mallorca, Deya and Sitges. Savage spent the next decade Savage spent his time painting abroad, returning to New Zealand to exhibit and sell the works in order to return back to Europe. During the early 1960s he travelled to Greece painting at Salamis, Crete and Rhodes, Kos, Salamis, Poros and Aegina. In New Zealand his works sold well but critical reaction remained uninterested, however in 1962 Savage was awarded the prestigious Kelliher Art Award.

Savage’s work and experience imbued his paintings with a strong sense of design. As is so often the case with artists his works are now, 25 years later, attracting critical acclaim for his strong use of colour and bold compositions.
http://jgg.co.nz/artists/cedric-savage/ 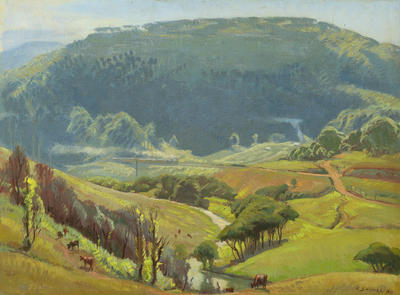 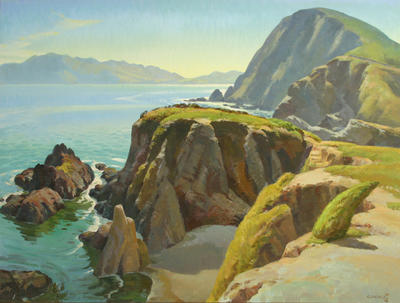