Biography
Thomas Francis Dicksee (1819–1895) was an English painter. He was a portraitist and painter of historical, genre subjects often inspired by the works of Shakespeare.

Thomas Francis Dicksee was born in London on 13 December 1819 and was the pupil of H. P. Briggs. He exhibited at the Royal Academy from 1841 until the year of his death. His brother John Robert Dicksee was also a painter, and his children, Sir Francis Dicksee and Margaret likewise became painters. In The Dictionary of Victorian Painters, Herbert Dicksee is given as his son also, but according to the City of London School, where Herbert taught, he was the son of John Robert Dicksee.

Thomas Dicksee also produced a series of portraits of family members, and also painted idealised portraits, including the Shakespearean characters Ophelia, Beatrice, Miranda and Ariel. A Juliet is in the Sunderland Art Gallery, and At the Opera is in the collection of Leicester Art Gallery. A portrait of Lady Teasdale is in the Adelaide Art Gallery, Australia[citation needed] and an Ophelia (1875) is in the Mead Art Museum, Amherst, Massachusetts.[1] Dicksee would become particularly well known for his depictions of Shakespearean heroines and exhibited a total of seven at the Royal Academy.[2] Other oil paintings have been seen in several auctions including Christ of the Cornfield,[3] Distant Thoughts,[4] and paintings of Beatrice,[5] Miranda,[6] and Amy Robsart.[7] He died in London on 6 November 1895.

sourced from https://en.wikipedia.org/wiki/Thomas_Francis_Dicksee on 2 Sept 2021 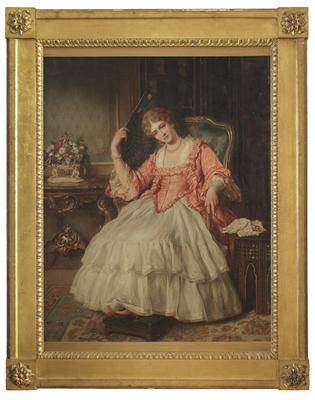