Biography
From: Nineteenth Century New Zealand Artists: A Guide & Handbook by Una Platts , pg 214.
SCOTT, James Fraser ARSA 1877–1932
Born Dunedin, son of well-known picture framer and painter David Scott (above). Studied at Dunedin School of Art, exhibited with OAS 1896–1907, winning in 1896 the prize for black and white work. 1898 went to Europe and studied at Julian Academy under Constant and at Munich, Antwerp and in Italy. As with many young New Zealand artists who studied overseas he continued sending out work for the OAS exhibitions each year. Returned to Dunedin about 1907 then moved to Wellington to be art master at Wellington Technical College. Exhibited NZ Academy of Fine Arts Win 1903 (an oil of Venice priced £52.10.0), 1905, 1907 (an oil of NZ subject priced £52.10.0), 1908. About 1909 moved to Sydney where he painted and taught until 1914. Exhibited NSW subject in NZ Academy of Fine Arts 1913; during 1914–18 worked in Australian Records section as official artist and was later employed in London painting war pictures for the Australian War Museum. After this lived in London on a tiny pension, and died in London just as his work was accepted for RA. Work included in Centennial Ex Wtn. 1940. Represented: Sarjeant, McDougall, DPAG and Hocken.

In a letter from JC Scott on the 14/8/54 (who sold the work to the Sarjeant) to town clerk
“ ..James Fraser Scott was well known and favourably commented on at the time of his death by English and Australian connoisseurs of art as a capable and talented artist who was capable of attaining further success. He was one of the Australian official War Artists for World War One and some 30 odd war pictures executed by him now hang in Canberra. Further he was the artist who was in charge of the decoration of the Australian Court at the Wembley exhibition, which was so favourable commented on…”

In an email from Ron Morrow (grandson of Scotts first cousin) to Sian van Dyk on the 20th of October 2012
"After James Fraser Scott died in London on Anzac Day 1932, his elder brother David Alexander Scott, travelled from Dunedin to London, to not only finalise his affairs, but to pack up all his unsold paintings and bring them back to N.Z. He turned the basement of his home at 30 Sheen Street Dunedin into a gallery and hung them all there. There were nearly 200, including 4 of the 5 pictures that had hung in the Royal Academy. In April 1935 a Memorial Exhibition of the paintings was held in the Pioneer Hall in Dunedin. It drew good crowds, received enthusiastic reviews, and was said to have been the largest exhibition ever held in N.Z. up to that time by a single artist.
Royal Academy Paintings:
1919. "Red Slipper", is described as a highly artistic study of a nude, the flesh colouring being extremely natural. A gown lies over an antique chair, and on the floor is a red slipper.
1920. "Springtime in France". This was the one missing in the Memorial Exhibition, and I haven't found a description of it, YET!
1922. "Silver and Green", another nude study before a beautiful green curtain, and again the flesh colouring was said to be faultless.
1926. "The Rance, Lower Dinan", is described as a landscape painting of great charm and a striking example of Scott's sense of architecture. I am delighted it is in the Sarjeant Gallery where I can see it the next time I'm in the North Island.
1932. "A Sculptor's Studio", appraised for its wealth of detail and fine draughtsmanship, it also has a story full of drama.

The Mr J.C. Scott who sold the paintings to the Sarjeant Gallery, is John Clingan Scott a younger brother of James Fraser Scott. It is interesting that the letter you have from his wife, Mrs Laura Georgina Scott nee Edwards dated 14th August 1954, was only a few months before John Clingan Scott died on 26th April 1955. She was correct when she said that James Fraser Scott was in charge of the decoration of the Australian Court at the 1924 Wembley Exhibition. What she omitted was that he was also commissioned to do the same for the New Zealand Court at the 1925 Wembley Exhibition.

James Fraser Scott was the second of the six boys of David and Catherine Scott nee Fraser. David Scott was a credible artist in his own right having exhibited with the Otago Art Society from 1885 -1919." 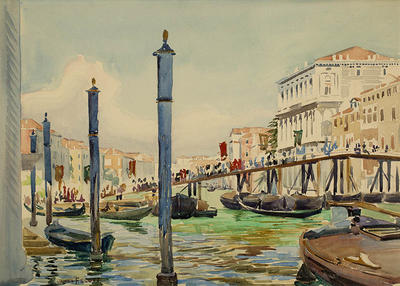 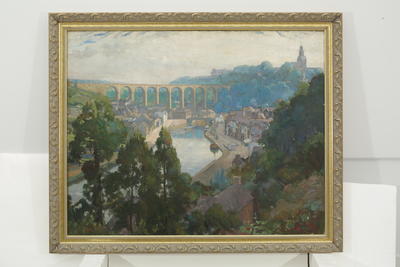 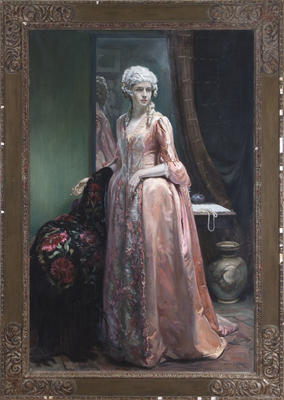 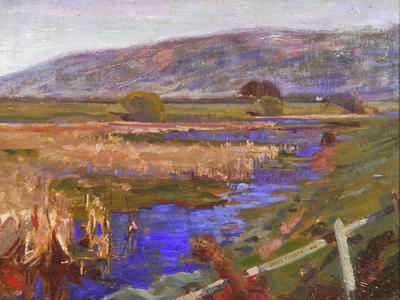