Biography
The life of the artist is itself an interesting story. Derwent Lees was born in Clarence, Tasmania to English parents and at an early age had a riding accident in which he suffered a head injury and lost a foot, after which he wore a wooden prosthetic. He was educated at Melbourne University as well as in Paris and in 1905 relocated to London where he studied at the Slade School of Art and he also taught drawing between 1908-1918. Lees travelled extensively through Europe and had close associations with the well-known painters Augustus John and J.D. Innes with whom he spent much time painting. It was through Augustus John that Lees met his wife Edith Harriet Price, who was a popular artist model in London at the time. She went by the name of Lyndra and was the subject of many of Lees’ paintings. It is more than likely that she is indeed our ‘Lady in Landscape’ ... ...
Although Lees’s works are held in many notable gallery collections in the United Kingdom and Australia, he had a rather sad and troubled life, suffering from an incurable mental disease for which he was institutionalised from 1919 and where he remained until his death on 24 March, 1931 in West Park Hospital, Surrey, England.
- Greg Donson, 14 December 2013, article for the Wanganui Chronicle re [1964/3/2] 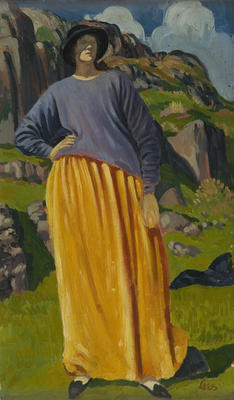