Biography
The highpoint of George O’Brien’s artistic career in New Zealand was the inaugural exhibition of the Otago Art Society in 1876, where he exhibited a remarkable twenty-eight paintings. These received mixed reviews. O’Brien’s realism was out of step in a colonial art world that accorded the highest praise to John Gully’s romanticism. Reviewers considered O’Brien’s work to be merely topographical, and while they praised his ‘painstaking accuracy’ they feared it was ‘quite destructive of artistic effect’. It was, however, conceded that ‘a few centuries hence the record will prove interesting’.(1)
After working periodically as an architectural draughtsman and civil engineer, O’Brien was appointed Dunedin’s assistant surveyor in 1872. His close attention to detail may have been fostered by his occupation, but his work has come to be recognised as less the product of straight topography than that of a unique vision — one that saw New Zealand as a ‘man-made colonial Arcady’.(2)
The surrounding Otago region provided the main subject for O’Brien’s painting, and he created a distinctive pictorial output consisting of views of the harbour, the town and its architecture. Despite their apparently realistic appearance, however, his views are highly contrived and reflect a very personal and visionary impression of place. 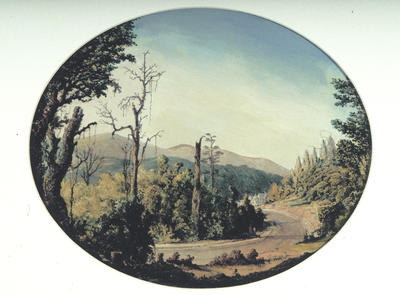