Biography
Jeffrey Harris’s career as a self-taught artist has enabled him to embark on a deeply personal journey of self-discovery through the medium of paint. Born and raised in Akaroa in the Banks Peninsula, Harris’s lack of a formal art education has allowed him to develop a distinctly unique style, which over the years has responded to the nuances of his time. A former Frances Hodgkins fellow (1977) Harris has painted full time since 1970. He has received numerous accolades for his work including having represented New Zealand at the Carnegie Institute Biennale, Pittsburgh, Pennsylvania in 1982 as well as being awarded the paramount prize in the James Wallace Art Awards 2003.

Largely recognized for his figurative painting, Harris’s works are concerned with the intricacies of relationships and emotions. They are often autobiographical and highly symbolic depictions of couples or family groups in domestic settings. The metaphor of ‘family’ is proposed by Harris to encompass notions regarding the complexity of relationships and human interaction. These interactions and connections are not necessarily determined by blood ties but may be extended metaphorically to include ideas and opinions. Harris’s images of domesticity are deceiving as Harris will often highlight the divisions and fractures that occur as relationships dissolve and fragment. The fragility of the institution of family is communicated through formal means where figures are often isolated and the composition is broken up through colour and disproportionate elements.

During the 70’s for instance, Harris’s style corresponded with the burgeoning neo-figurative trend which encompassed artists such as Tony Fomison, Philip Clairmont, Alistair Nisbet-Smith and Nigel Brown. What Harris has in common with these artists is an internal dialogue expressed through paint, the figure- often a self-portrait- the main protagonist in an interior drama. Harris’s body of work in particular features numerous self-portraits that acknowledge the stylistic quality of artists such as Durer, Bacon, Picasso, Kokoschka and Balthus. In particular Harris’s admiration for the work of Albrecht Dürer derives from an appreciation of the depth of its emotional integrity. Harris states that:

“Dürer surrounds himself with objects that are charged with meaning…In my paintings I try to imbue all the objects that surround the central characters with as much significance as that. If you look at any of my pictures you should learn a lot more about what’s happening in the centre of visual attention by looking at what’s happening around it. My 1970 Self-Portrait is based on Dürer’s self portrait of Christ. I’ve tried to integrate European art with my experience here in New Zealand.” (Art New Zealand 18, Summer 1981. “A Conversation with Jeffrey Harris”, pp22-29).

While stylistically different, Harris’s thematic concerns are comparable to those of his contemporaries Tony Fomison, Rudolph Gopas and Philip Clairmont in their expressionist exploration of an inner emotional state. Isolation, human suffering, sacrifice and the tragic frailty of life are recurrent themes suggested through Harris’s own lexicon of religious symbols which are themselves indebted to the traditions of the early Renaissance masters. A noose implies the contemplation of suicide, blood suggests sacrifice and atonement, a boat represents a journey or transition through life, a bird conveys the human spirit while a cross appropriated from Christian iconography denotes the crucifixion and human suffering. The reference to religious art and subject matter affords Harris the ability to convey a level of intensity and emotional candour that secular art fails to communicate.

A move to Melbourne in 1986 allowed Harris to reinvent himself. His work evolved stylistically to become less figurative and more abstract as Harris embraced the neo-expressionist wave that engulfed the Australian art scene at the time. McAloon writes that “the intense colours and broad gestures that formed the psychological spaces inhabited by his figures were bought to the forefront of large ambitious abstracts; while the tightly wound lines of his earlier drawings were transformed in a loose, calligraphic outpouring of charcoal drawings that owed much to the lessons of Franz Kline.” (McAloon, William, Home and Away; Contemporary Australian and New Zealand Art from the Chartwell Collection. David Bateman: Auckland, 1999:104)

“In all of Jeffrey Harris’s work we are aware of his determination to convey an intensity of experience; to create images which stay in our minds and which can clarify and enlarge our awareness. They are loaded and uneasy images which though contemplative are seldom calm.” (Brownson, Ronald (ed.) Anxious Images: Aspects of New Zealand Art, Auckland City Art Gallery: Auckland, 1984:35)
Ref http://www.pageblackiegallery.co.nz/artists/jeffrey-harris/ 1/3/2017 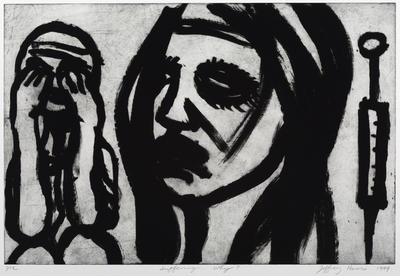 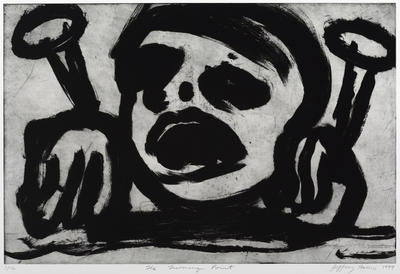 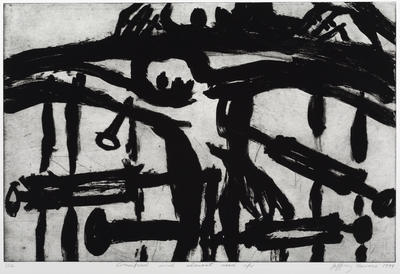 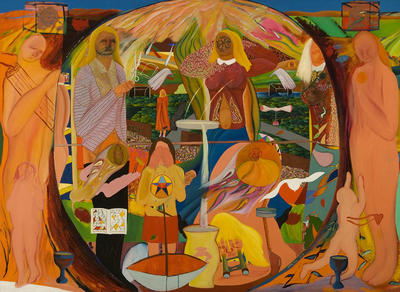 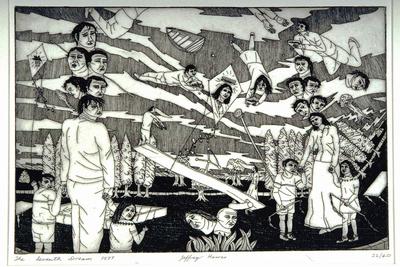 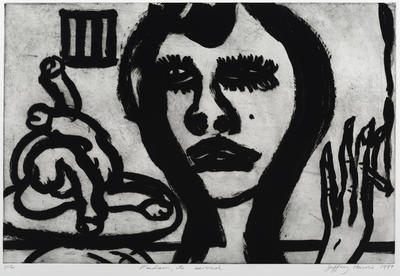 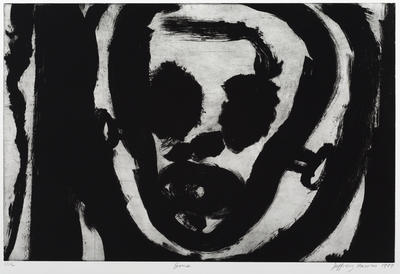 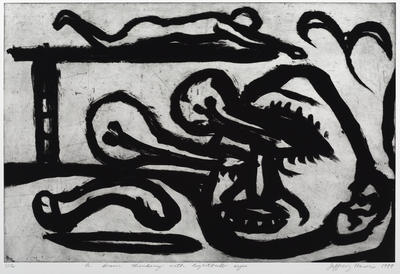 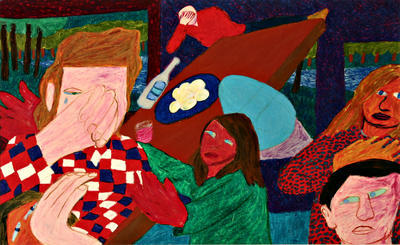 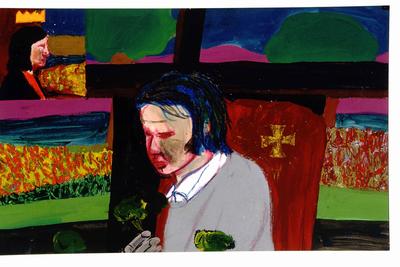