Biography
Miss Florence Reason, was born in Clerkenwell in London in 1859, the daughter of an engraver in precious metals, who employed two men. In the 1861 Census the family, with many extended relatives were living at 23 Wilmington Square WC!.

Florence attended the Female Art School, Queen Square from 1875 to about 1882, winning National Medals, both Gold and Silver almost every year, as well as various scholarships, including The Gilchrist Scholarship for 2 years, worth £50 a year and the Queen's Scholarship several times. Her successes at art school are very well documented in the national press of the time.

By 1891 she was living in Bloomsbury, sharing a flat with another female artist Mary E. Harding from Exeter, who was her painting companion later in Devon. Her occupation was listed as Artist, Painter and Teacher of Drawing. We know from the press that at this time, she was on the staff of the French Art School in Bloomsbury. In 1901, she was living with her sister Kathleen, who was a Governess, at 139 Alexandra Road, Hampstead. In 1911, she was visiting a friend in Exeter, a city to which she was shortly to move, to share studio with Mary Harding in Higher Summerlands. She died in Exeter in 1933.

She exhibited at Eland's Art Gallery in Exeter locally, but exhibited from 1881-1914 17 paintings at the Royal Academy, 7 at the Society of Women Artists, 7 at the Walker in Liverpool, 3 at Manchester City AG, 1 in Birmingham and 3 at the Royal Institute.
- https://www.antiques-atlas.com/antique/florence_reason_1859-1933_watercolour_the_offering/as237a1433 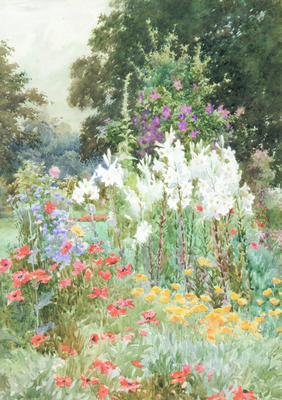