William (Will) Henry Dyson (3 September 1880 – 21 January 1938) was an Australian illustrator and political cartoonist.


[edit] Early lifeDyson was born at Alfredton, near Ballarat, Victoria, Australia, the son of George Dyson, then a hawker and later a mining engineer, and his wife Jane, née Mayall. Dyson was educated at state schools at Ballarat and South Melbourne. Will's brother was Edward Dyson who supported the family at this time. An elder brother, Ambrose Dyson (1876 – 3 June 1913) was a vigorous and able popular illustrator,. Will followed in his brother's steps, before he was 21 one of his drawings was accepted by The Bulletin, and he then obtained an appointment on the Adelaide Critic as a black and white artist.

[edit] Drawing careerDyson returned to Melbourne in 1902, and did a good deal of work for The Bulletin, Melbourne Punch, and other papers. In 1906 Fact'ry 'Ands by his brother Edward Dyson was published with over 50 illustrations by him. These are curiously restless and exaggerated, but the best of his work at this period showed that an artist of great originality was gradually finding himself. Dyson was not a natural draughtsman like Phil May, for in his early book illustrations he too often failed to realize the body under the clothes. However, a vein of genuine satire kept showing itself, and it was early realized that there was a mind behind the work. It was no doubt part of the honesty of the artist that when he held a show of his drawings in 1909 they were carefully graded, and some of the least good were priced as low as ten shillings and sixpence.


«Peace and Future Cannon Fodder»In 1910 Dyson was married to Ruby Lindsay, a member of the well-known family of artists. They then went to London where Dyson was employed on the Weekly Despatch. He also drew some coloured cartoons for Vanity Fair signed "Emu", and later began to contribute to the labour paper, the Daily Herald. His cartoons became famous and had much influence in establishing the paper. In 1914 he published Cartoons, a selection from his work in its pages. In January 1915 appeared Kultur Cartoons, and later in the year he became an Australian official artist at the front. He was not concerned about finding safe vantage points and was twice wounded in 1917. Exhibitions of his war cartoons were held in London, and in November 1918 he published Australia at War, which contains some of his finest drawings. In March 1919, to his great grief, his wife died. In the following year he published a selection of her work The Drawings of Ruby Lind accompanied by a little volume Poems in Memory of a Wife (dated 1919).

It was shortly after his wife's death that he drew what was to become one of the most celebrated and widely-reproduced of all cartoons, entitled "Peace and Future Cannon Fodder" and astonishing in its uncanny foresight. Published in the British Daily Herald on 13 May 1919, it showed David Lloyd George, Vittorio Orlando and Georges Clemenceau (the Prime Ministers of Britain, Italy and France respectively), together with Woodrow Wilson, the President of the United States, emerging after a meeting at Versailles to discuss the Peace Treaty. Clemenceau, who was identified by his nickname "The Tiger", is saying to the others: "Curious! I seem to hear a child weeping!". And there, behind a pillar, is a child in tears; it is labelled "1940 Class".[1]

Dyson was given a large salary to return to Australia in 1925 to work on the staff of the Melbourne Herald and Punch, and stayed for five years. He returned to London by way of New York, where he had a successful show of his dry-points, and he held a similar exhibition in London in December 1930 which attracted much attention. Dyson resumed his connexion with the Daily Herald and contributed cartoons to it until his death. He had become interested in the Douglas Credit theory, and in 1933 published Artist Among the Bankers with 19 of his own illustrations. He died suddenly on 21 January 1938 from a long-standing heart condition. A daughter survived him.

[edit] LegacyDyson was tall and thin and was brought up in a mining district, knew something of the difficulties of labouring men, and no personal success could lessen his championship of the underdog. Whatever he attempted he did well. He was a good public speaker, a writer of excellent prose, a charming conversationalist, and his little known Poems in Memory of a Wife belongs to the regions of true poetry. Dyson took up dry pointing late in life he quickly mastered the possibilities of his medium. His full genius was expressed in his cartoons, he became the sharpist satirist of his day. The largest collection of his work is at National Museum of Australia, Canberra, and he is also represented at the national galleries at Melbourne and Sydney and at the Victoria and Albert Museum, London. 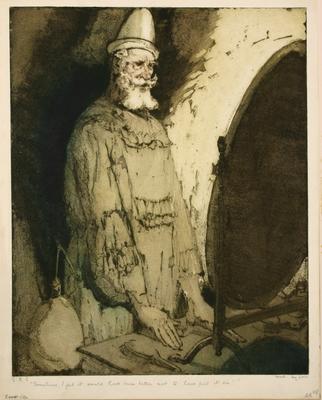 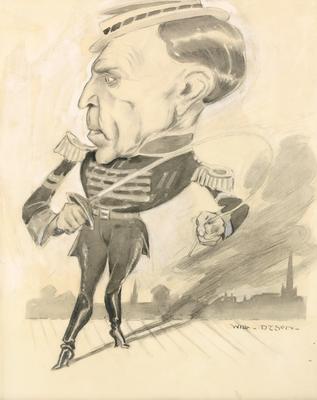