Biography
David Wilson (1873-1935)
He grew up in Belfast, after his father, a minister, took up a post at Malone Presbyterian Church, and was educated at the Royal Belfast Academical Institution. After leaving school he worked for the Northern Bank, taking evening classes at the Government School of Art, and joined the Belfast Art Society.

During the 1890s he met Alf S. Moore, aka Nomad, and contributed to his satirical magazine Nomad's Weekly. He had his first cartoon published in the Daily Chronicle in 1895. In 1899 he began contributing a regular full-page caricature to The Magpie, another Belfast weekly, his style already very assured.

He married Edith Mary Mageean in 1890, and the couple moved to London, where Wilson studied at the Sphinx Studio. They had a son, Jimmy, in 1900, and a daughter, Peggy, in 1908, but Edith became an acute alcoholic and died in 1910 or 1911. Wilson married again soon after.

He contributed 55 cartoons to Punch, including Boer War material, between 1900 and 1933, his work taking on influences from Japanese prints and German Jugendstil (Art Nouveau) illustration. From 1910 to 1916 he was chief cartoonist for The Graphic, and from 1912 his cartoons appeared regularly in the Daily Chronicle. He also contributed to Nomad's Weekly, Fun, London Opinion, The Sketch, The Star, Temple Magazine, Life and the Tatler. He work continued to appear in publications like The Passing Show, The World and Pan until 1920.

Books he illustrated include Arthur Waghorne's Through a Peer Glass: Winnie's Adventures in Wastemonster (1908), A Song of the Open Road and othe verses by Louis J. McQuilland (1916), and Wilhelm the Ruthless by A. A. Braun (1917). He illustrated propaganda posters for the government during the First World War, and also designed posters for the Apollo Theatre.

Wilson believed he had psychic abilities and was fascinated by dreams, which provided the inspiration for some of his cartoons. A socialist in his youth, he came to support the Liberal Party, particularly admiring David Lloyd George but disliking A. J. Balfour and Winston Churchill.

From the 1920s on his reputation as a painter developed, concentrating on landscapes and flowers, mainly in watercolour. An exhibition of his work was held in London in November 1924. He became an associate of the Royal Society of British Artists that year, and a full member in 1926. He was also a member of the Royal Institute of Painters in Water Colours, the Savage Club, and the Newspaper Press Fund.

His son Jimmy committed suicide in the early 1930s, and Wilson never recovered from the shock. He was continuously ill during the last two years of his life, but never stopped working 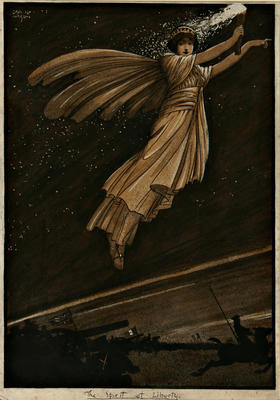