This is one of the paintings in our collection. It was made in Great Britain in 1916.
See full details

About the Work
“This is the kind of work that gets lost because it does not fit neatly into an art-historical narrative. It’s a surprising mix of Impressionist colour and paintwork and pre-Raphaelite composition and paintwork. St. George for England is quite a difficult work to photograph and reproduce. Paintings are made up of layers, some textured and some transparent and this makes for difficulties in reproduction. There is a terrible illusion these days that people think they have seen a painting if they have seen a photo of a painting. Paintings that don’t photograph well are at a big disadvantage for being remembered these days. And those are the paintings that play to the strengths of what painting can do (all the colour contrast and gestural work that is compromised when you photograph a painting). It’s a bit sad. This is a great work though, and I hope that one day it is on long-term display because it would surely be a public favourite again.”
- Andrew McLeod, 'My Choice' exhibition series, August 2022

Saint George is known as the patron saint of England. He is popularly identified with ideals of honour, bravery and gallantry. Very little is known about the real Saint George but he is believed to have been born to Christian parents in Cappadocia (now Turkey) in 3rd century AD, that he became a Roman soldier and later lived in Palestine. He protested against Rome's persecution of Christians, was imprisoned and tortured, remaining true to his faith before being beheaded at Lydda in Palestine. 23rd April was named as Saint George's Day in 1222. The most familiar story of Saint George rescuing a maiden from a dragon is most likely a result of the rendering of his legend during medieval and Renaissance times, made popular through a book printed in 1483 by Caxton titled 'The Golden Legend' which was widely circulated. The story has continued to be retold in many formats and as a popular subject for artwork.
This painting by West is an allegorical work completed in 1916 and makes reference to an incident that occurred during World War I on 1 April 1916 when a Zeppelin LZ 48 was damaged by ground fire from Dartford AA battery. The airship came down at Kentish Knock in the Thames estuary, Essex. One crew member was killed and the other 17 taken prisoner of war. During World War I giant rigid airships (some of which were Zeppelins) dropped more than 5,000 bombs across Britain, initially largely unopposed, and caused huge amounts of damage and loss of life. The downing of one of these massive ships was a cause for celebration and here in this painting West draws the allegory between this incident and St George's legendary rescue of the maiden from the dragon. The linking of St George with this event was clearly a popular theme as there is a painting in the Imperial War Museum by Donald Maxwell showing the downed craft in the Thames Estuary titled 'St George and the Dragon: Zeppelin L15 in the Thames, April 1916' see https://www.iwm.org.uk/collections/item/object/17723
- Jennifer Taylor Moore, Curator of Collections, Sarjeant Gallery (2022)

Description
Painting, on left edge of painting a knight in armour on a white horse is jousting a dragon emerging from a cave. A maiden is on her knees with her head down, tied to a nearby tree. Terraced hills and building ruins are in the misty background. 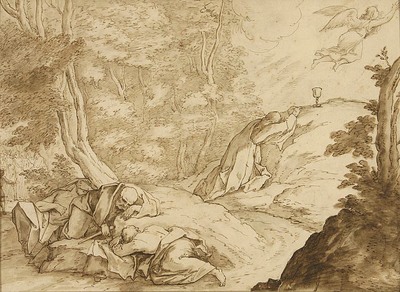