This is one of the paintings in our collection. It was made in Whanganui, Whanganui Region, New Zealand in 2008.
See full details

About the Work
This is the title work from Mark Braunias's exhibition at the Sarjeant Gallery following his Tylee Residency in 2007. Excerpt from the exhibition catalogue published in 2008:
"Not long after his arrival in Wanganui, Braunias had what might be called an artist's epiphany while waiting outside the local Embassy Cinema for a film to start. He felt momentarily that he was back in mid-1970s Tauranga, where he grew up. From this point Braunias spent hours in the Wanganui District Library's heritage room, trawling through mid 1970s editions of the Wanganui Chronicle stored on microfiche. It wasn't so much the news stores that captured Braunias's attention but the adverts for local businesses and particularly those of the department store Londontown. ...
This exhibition takes its name from a former department store - Londontown - that was in Wangnanui's main street. A one-stop shop, the department store that many New Zealanders grew up with is now well and truly deceased, replaced by the dichotomy of mini and maxi shopping experiences.
Helen B. Laurenson, in her book 'Going Up Going Down: The Rise and Fall of the Department Store' comments on these stores: "Modern and up to date with fashion, brimming with colour and light, bustling with purposeful shoppers and courteous staff, they were pivotal centre of interest around which much of the life of cities and towns in New Zealand revolved. They offered a glimpse of the exotic 'other' - the world of the great metropolis". (Laurenson, Auckland University Press, 2005, p.7)
Advertisements from Londontown brought a bit of Carnaby Street sophistication to 1970s Wanganui - a misfit in a provincial New Zealand town. The Londontown man looked more like Roger Moore's James Bond in a three-piece suit than some joker called Travis from Gonville, in stubbies and a mesh singlet. By homing in on these adverts, Braunias deals in the universal currency of self deception as to who we are and where we might be located socially and physically. The very name Londontown intrigued Braunias, seeming an unlikely name for a department store in a provincial town, although perhaps not when you put it into the context of many street names in Wanganui - Liverpool, London, Glasgow, Dublin. It's just a name, but its provenance implies something more worldly than a humble local department store."
Greg Donson, Londontown exhibition catalogue, 2008

Media
ink and acrylic on canvas 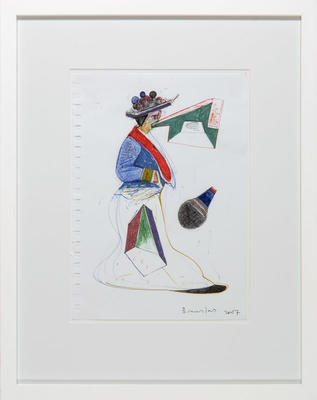 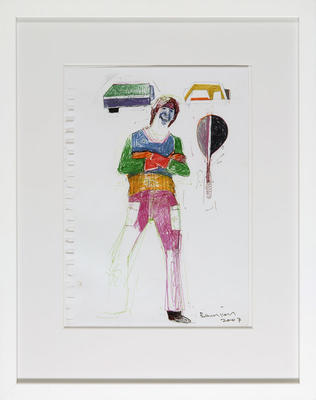 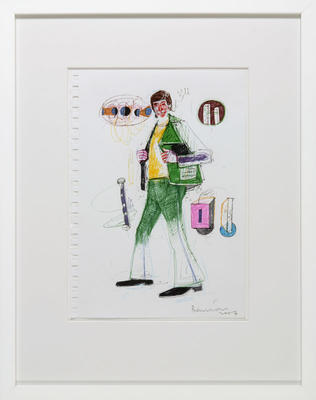 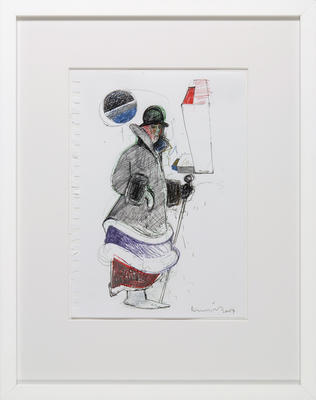 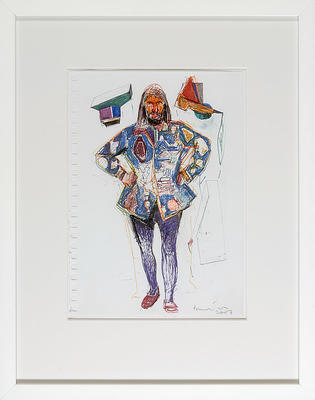 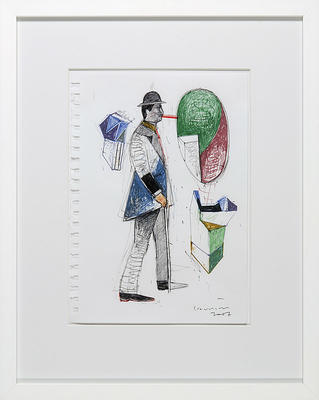 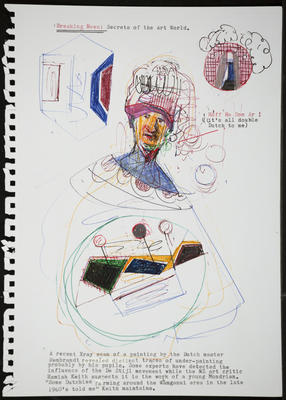