This is one of the sculptures in our collection. It was made in Whanganui, Whanganui Region, New Zealand in 2017.
See full details

About the Work
From April to September of 2016 Wendy Fairclough returned to her home town of Whanganui to be artist-in-residence at the Sarjeant Gallery's historic Tylee Cottage. Having left for a 'wander round' Australia when she was eighteen, this was the first extended period of time that she had spent in New Zealand since her departure. The opportunity allowed Fairclough to bring together existing ideas and concerns that she had explored in her work, but do so in a context that was personally meaningful to her. With the idea of the 'common ground' between us all, Fairclough chose to focus on Māori and European food sources that were available shortly after European settlement of this country, around the 1860s. In part this was inspired by Fairclough's childhood memories of visiting the Whanganui Regional Museum, where she was fascinated by displays that housed objects associated with hunting and gathering for Māori. Amongst these were hinaki-eel pots, an important component of pa tuna (eel weirs) on the Whanganui River which were fences placed in the water used to guide eels into a net and then into the hinaki. Fairclough comments ''I now understand that I was recognising and appreciating the ingenuity and creativity of the human mind and hand."

During her time in Whanganui and on her return to Australia Fairclough made three major new works. Rain at night ... featuring twelve eels cast in pale and dark grey glass takes its title from the Māori proverb He ua kite pō, he paewai kite ao (Rain at night, the paewai eel in the morning). The second work takes its title from a Māori proverb Nā tō rourou, nā taku rourou ka ora ai te iwi (With your food basket, and my food basket, we will sustain the people). For this work Fairclough worked closely with her sister-in-law Trina Taurua, a traditional Māori weaver and tutor at Te Wananga o Aotearoa and Ross Wilson-a bronze-caster based in Marton, near Whanganui. Taurua wove three kete that were specifically identified with carrying kumara and the rarer small Māori potatoes. The third work, Yield features a cornucopia of fruits and vegetables that were introduced by European settlers alongside objects cast in concrete.

Description
Installation of life-size cast glass eels placed on a large flat surface. The eels are in two different sizes with some in an ochre brown, and the others in a smoky grey/green glass. The eels are curled in motion and are all facing in the same direction, they are placed within four clusters, with one on its own. There are 12 in total comprising of 5 large and 7 small eels. 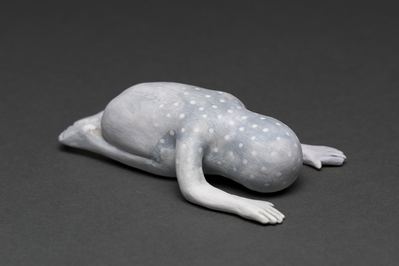