Biography
Cat Auburn is a New Zealand artist currently based in the UK. She works in a diverse range of media: sculpture, photography, moving image, installation and film. She has a keen interest in how culture is constructed, coupled with a desire to interrogate and make visible the complicated political, social and economic structures that surround us all.

Auburn has exhibited both in New Zealand and internationally. She was the 2016 Tyneside Cinema Graduate Artist in Residence (UK) and developed a new film commission 'Preparing the Ground', featuring sites in Vienna, Glasgow and Northumberland.

She recently completed a Master of Fine Arts at the BxNU Institute, Northumbria University (UK), where her interest in site-specific research drew her into the museum collections and local histories of Newcastle Upon Tyne.

Auburn received the 2016 Award for Best Regional Art Exhibition at the New Zealand Museum Awards for her exhibition 'The Horses Stayed Behind'. In 2010 she was a finalist in the Wallace Art Award and won the Olivia Spencer Bower Foundation Art Award - a year-long residency in Christchurch. In 2014/15 she was the Tylee Cottage Artist in Residence with the Sarjeant Gallery in Whanganui and in 2015 she represented New Zealand at the TRIO Sculpture Biennial in Rio de Janeiro, Brazil.
Ref http://www.catauburn.com/about.html 3/3/2017

Cat Auburn works across a range of media, from film to sculpture and installation, to explore broad social and historical issues.

Her socially-engaged projects draw on site-specific narratives and histories, frequently employing anthropomorphism - the attribution of human motivation, characteristics or behaviour to animals - to explore notions of socialisation, power, freedom and constraint.

Her most recent project, a 30 minute film, Ask the Fellows who Cut the Hay, is a recreation of the widely loved 1821 painting The Hay Wain by John Constable. Another exhibition currently touring New Zealand, The Horses Stayed Behind, commemorates the thousands of horses that left New Zealand for World War I and never returned. The centrepiece is a five-metre wide tapestry made of 500 horse hair rosettes, woven in the style of the Victorian hair-wreathes.

In 2016 Auburn completed a Master of Fine Art (Distinction) at Northumbria University in the United Kingdom and she is currently living and working in the UK. She has exhibited regularly, both in New Zealand and internationally, since graduating in 2008 with a Post Graduate Diploma in Fine Arts (Distinction) from the Elam School of Fine Arts. In 2015 she represented New Zealand at the TRIO Sculpture Biennial in Rio de Janeiro, Brazil. She is the recipient of numerous scholarships and residencies including the Tyneside Cinemas artist residency in 2016, the Olivia Spencer Bower Foundation Art Award in 2010 with a year-long residency in Christchurch, and the Tylee Cottage Residency at the Sarjeant Art Gallery.
Ref http://www.bartleyandcompanyart.co.nz/artist,Catauburn,4109 3/3/2017 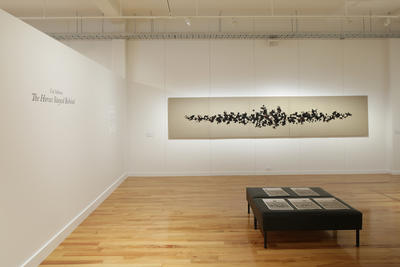