Biography
DONAHEY, JAMES HARRISON "HAL" (8 Apr. 1875-1 June 1949), chief editorial cartoonist of the PLAIN DEALER for half a century, was born to John Coulter and Catherine Chaney Donahey of West Chester, Tuscarawas County, Ohio. His first newspaper experience was with the Ohio Democrat (New Philadelphia), before coming to Cleveland to study at the Cleveland School of Art. In 1896 he became an illustrator for the CLEVELAND WORLD, and began drawing for the Plain Dealer on 1 Jan. 1900. During the mayoral campaign of 1907, Donahey won an artists' duel with Homer Davenport, whom the Leader borrowed from New York to battle Mayor TOM L. JOHNSON. On 23 Apr. 1910, Donahey published his most famous cartoon at the death of Mark Twain, depicting 2 somber boys rafting a flower-draped bier "Down the River." Some of his originals were prominently displayed in the GREAT LAKES EXPOSITION of 1936.

His national reputation brought Donahey an invitation to work for the New York Journal in 1911, but after a week he returned to Cleveland. Combining work with his love of travel, Donahey provided the paper with pictorial accounts of such diverse locales as Egypt and Alaska. Donahey was also active in community affairs, receiving the Cleveland Community Fund's Distinguished Service Award in 1938. After his first wife, Beatrice, died in 1939, Donahey married Mrs. Josephine Rhodes, a widow. He had one stepdaughter, Mrs. K. M. Haber, but no children of his own. After the 1920s, he lived on a farm in Aurora, dying shortly after suffering a stroke. He was buried in New Philadelphia.

sourced from on https://case.edu/ech/articles/d/donahey-james-harrison 2 Sept 2021 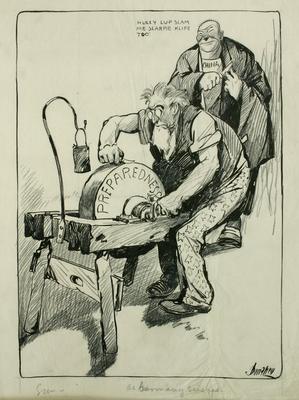 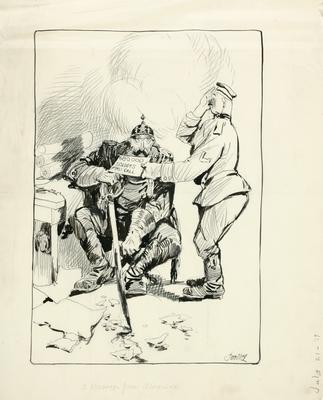 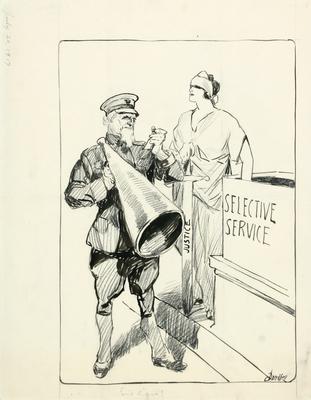