"Oswald Pryor (1881-1971), cartoonist and author, was born on 15 February 1881 at Moonta Mines, South Australia, second of three surviving children of Cornish parents James Pryor, mine agent, and his wife Caroline Jane, née Richards. James migrated to Victoria in 1866, moved to Moonta Mines in 1869 and married Caroline that year.

After primary schooling Oswald began work at 13 for the Wallaroo & Moonta Mining & Smelting Co., under H. R. Hancock whose entry he eventually wrote for this dictionary. Pryor was an apprentice in the mechanical shops but also developed his talent in the drawing office. He attended night classes at the Moonta School of Mines, became a mechanical draftsman and, from 1911, was the manager of the Moonta Mines cementation works. On 8 January 1908 he married Mabel Dixon; they had one son. Pryor was an accomplished organist at the Moonta Mines Methodist Church and later at Kensington Park Methodist Church, Adelaide.

In 1919 or 1920 with the Wallaroo and Moonta mines slipping into a serious decline he moved to Adelaide where he worked briefly for the Hume Pipe Co. Later he was a staff artist for the News and later again he ran a small distributing office for the Sydney Bulletin. He freelanced as a cartoonist from the front room of his Leabrook home on a wooden table he made himself. His wife was totally deaf from the age of 30; they lived simply and quietly. Pryor was a small, slight man whose humour was droll and whimsical.

His first cartoon was published in Quiz on 9 October 1901. Then for two years from 1902 he attended the School of Design, Painting and Technical Art under H. P. Gill in Adelaide. C. J. Dennis, editor in turn of the Critic and the Gadfly, published Pryor's drawings and encouraged him to use his Cornish compatriots as subjects. For some years he used the signature, 'Cipher'. Subsequently his cartoons were accepted for the Bulletin, the South Australian Wireless Monthly and several other periodicals. Most appeared in the Bulletin and Cornish families at Moonta and Wallaroo, the miners, their 'cappens', preachers, chapels and goats were comically portrayed to a large and appreciative audience. His last drawing was published when he was 85.

Pryor's work for the News in the late 1920s into the 1930s included a weekly political cartoon. He published a collection of his cartoons privately as Cornish Pasty in 1950. It was republished by Rigby in 1961 and Cousin Jacks and Jennys followed in 1966. His illustrated folk-history of the Moonta-Kadina-Wallaroo district, Australia's Little Cornwall (the name has been used ever since), won third prize in the book section of the first Advertiser literary competition in 1962. A Labor sympathizer, Pryor followed politics by listening to parliamentary broadcasts.

In 1937 he visited Cornwall, where his drawings were popular, and in 1951 he was made a bard of the Gorsedd of Cornwall for his contribution to Cornish history in Australia; he took the Cornish name Carer Creftow (lover of the arts). Subsequently he was a vice-president and patron of the Cornish Association of South Australia.

For the last few years of his life he lived in Canberra with his son Lindsay Dixon, professor of botany at the Australian National University. Oswald Pryor died at nearby Queanbeyan on 13 June 1971 and was cremated. A grandson Geoff Pryor has been the cartoonist for the Canberra Times.

This article was first published in hardcopy in Australian Dictionary of Biography, Volume 11, (MUP), 1988" 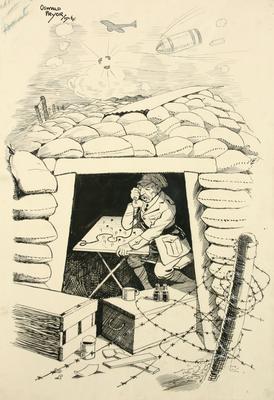