Biography
Born and raised in Auckland, in 1961, Brendan has been working with clay full-time since 1987. He has a diploma in Fine Arts from Otago Polytechnic(1983), where he majored in painting.
Brendan has amassed a large following of clientele who appreciate his fine New Zealand ceramics and creative and unusual sculpture. More recently his contemporary sculpture has seen him combine other materials with the ceramics such as steel, brass, aluminium and wood. His work has been exhibited throughout the country in major competitions and exhibitions where he has won several awards, and is represented in the Auckland Museum, James Wallace and regional collections. Brendan has taught Sculpture and Design at Unitec and at the Auckland Studio Potters Society. He hashad additional experience working as a assistant stage manager and sculptural advisor for Inside Out Productions from 1995-2006 on various productions.
Brendan teaches at the Auckland Studio Potter Society. He has also been a lecturer at Unitec 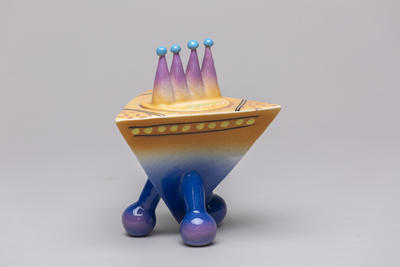