This is one of the prints in our collection. It was made in New Zealand in circa 1949.
See full details

About the Work
"I love this artwork because of the attention to detail in the birds but also equally in the background fauna. The precise line work gives a neat and cohesive look to the overall work. E. Mervyn Taylor balances the black and white really well, this means nothing looks out of place or unintentional."
- Freyja Wrigglesworth, 'My Choice' exhibition series, September 2022

The study of Māori mythology provided E Mervyn Taylor with a rich source of subject matter. 'Magical wooden head' is based on the legend of a tohunga (priest), Hakawau, who challenged a carved wooden head that could cause death to anyone who gazed on it. Taylor’s early training as a jewellery designer and engraver honed his ability with expressive line, and this skill is perfectly demonstrated in this accomplished work. The finely detailed image creates a sense of tremendous energy and infinite space within a limited area. Taylor emphasises his mastery of the craft of wood engraving by drawing two straight lines diagonally across the image. These lines connect the eyes in the head to the figure of the tohunga in the lower right. They are essential to the fullest expression of the mythical story, and are beautifully integrated into the whole design, neither dominating nor distorting the composition.
In 1952 Taylor included 'Magical wooden head' in his successful application for the Association of New Zealand Art Societies Fellowship. The recipient was usually required to travel overseas, but he used the funding to stay at Te Kaha on the east coast of the North Island, studying Māori life and customs from within Te Whānau-ā-Apanui. Taylor also promoted Māori myths and legends through his own private press publications and through his position as art editor and illustrator for the School Publications Branch of the Department of Education.
New Zealand flora and fauna were other areas of particular interest, and Taylor produced similarly exceptional wood engravings of these subjects. They were given due recognition with an exhibition at the American Museum of Natural History in New York in 1954. Nga huia is a fine example of his work in this area. There is a strong design, and the precisely illustrated details of both subjects and vegetation still convey a good sense of their inherent animal and botanical qualities.
Modest about his own achievements, Taylor’s subject matter places him as one ‘of a generation that understood the need to cast off colonialism and discover from within New Zealand a way to see the world and interpret its character from a South Pacific perspective’.(1)
- Tony Mackle, This essay originally appeared in New Zealand Art at Te Papa (Te Papa Press, 2018). See https://collections.tepapa.govt.nz/object/41265 (accessed 31/8/2022)
(1 Bryan James, E Mervyn Taylor: Artist: Craftsman, Steele Roberts, Wellington, 2006, p. 10.)

Description
A black and white woodcut print of a pair of the now extinct New Zealand Huia birds. The male Huia bird has a short beak and the female Huia has a long beak. The pair are in a leafy tree. 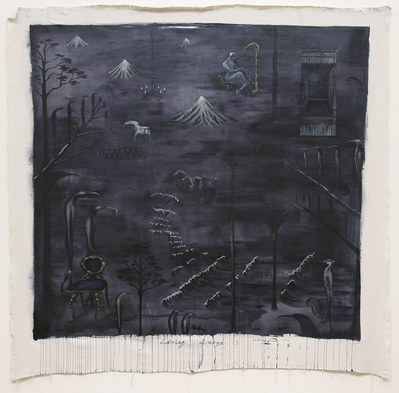