Ernest Mervyn Taylor was born on 4 August 1906 in Auckland, the son of Emily Webber and her husband, Ernest Herbert Taylor, a postman. Known as Mervyn, he attended Grafton School from 1912 to 1920, passing his proficiency examination. His schooling was interrupted by poliomyelitis and rheumatic fever, however, and throughout his life he walked with a slight limp from his polio infection.

Although he expressed interest in the arts his parents did not want him to be an artist. After a year in the third form at Auckland Grammar School (1921), he was apprenticed as an engraver from 1922 to 1928 with the firm W. H. Worrall, manufacturing jewellers. Ironically, it was this early training in engraving that developed his artistic talents, particularly his flair for design. Jewellery engraving convinced Taylor of the importance of craftsmanship, which became an important aspect of all his later work.

After completing his apprenticeship he did lettering and window display work for Godfrey Phillips (New Zealand) Limited until 1935, when he moved to Wellington to work in the advertising studio of W. D. & H. O. Wills. In 1937 he was employed by the advertising firm of Carlton-Carruthers. However, Taylor found advertising work too restricting and resigned in 1939 to pursue a career as a free-lance artist, setting up a small studio in Willis Street with George Woods. After two years free-lance work, which included designing the Berlei stand at the New Zealand Centennial Exhibition in 1939–40, he enlisted for war service in April 1942. He served as a maps draughtsman and worked for the Army Education and Welfare Service.

From 1944 to 1946 Taylor was the art editor and illustrator for the School Publications Branch of the Department of Education. Having experimented previously with wood engraving, he immediately saw its merits for illustration in the school journals and adopted it as a regular form of expression. From this time until his death he created over 200 wood-blocks. Many were devoted to New Zealand’s flora and fauna but the greater number depicted scenes of Maori life and mythology.

Taylor had been introduced to Maori mythology by his wife, Edelweiss Yeoville (Teddy) Cooke, whom he had married in Wanganui on 15 December 1937. They settled in Wellington and had a son and a daughter. Aspects of Maori life and legend became an absorbing interest, reinforced by his contact with Woods and Russell Clark. In 1952, when he was awarded the Association of New Zealand Art Societies scholarship, he chose to remain in New Zealand and spent many months at Te Kaha, on the East Coast, studying Maori life. Taylor was part of the nationalist movement in New Zealand art, which sought to capture the particular qualities of this country’s landscape and culture. He also produced watercolours depicting the regional qualities and features of various parts of New Zealand.

In 1950 Taylor was made a member of the Society of Illustrators, New York. Four years later a solo exhibition of his natural history images was held at the American Museum of Natural History in New York. The International Institute of Arts and Letters in Lindau, East Germany, made him a fellow in 1953. In 1957 his work was included in an international exhibition of prints in Toyko. Recognition also came from the Soviet Union, where he held a solo exhibition of 102 works as a guest of the Ministry of Culture in 1958; the following year Taylor’s work was included in an exhibition of New Zealand art which toured Russia. In 1958 he also travelled to the United States (on a foreign leader grant), Czechoslovakia and England.

In New Zealand he exhibited in Auckland, Wellington and various provincial centres, and was given a touring exhibition by the Community Arts Service (1954–56). Taylor was also concerned for the development of the craft of printmaking in New Zealand. As a council member of the New Zealand Academy of Fine Arts (1953–60), Taylor used his influence and initiative to bring about the first combined exhibition of sculpture, pottery and the graphic arts, held at the NZAFA in 1962. He was also a member of the National Art Gallery committee of management from 1958 to 1964.

The notion of the artist–craftsman underpinned Taylor’s career and aligned him with the Arts and Crafts movement in England and the Bauhaus movement in Germany. His philosophy of bringing art closer to people was manifested by murals in public buildings, and in book production and illustration. He received 11 commissions for murals, which he produced using a wide range of media and techniques including paint, sand-blasting, wood-incising and ceramic tiles. Two of his most notable murals were produced for Broadcasting House in Wellington and the Otaki Borough Council.

From 1949 to 1952 Taylor helped edit the magazine Design Review , published by the Architectural Centre in Wellington. Participation in this venture led to the formation of his own publishing house, Mermaid Press, which published Engravings on wood (1957), as well as Christmas cards and animal prints for children. He also illustrated books published by Wingfield Press, Pelorus Press and A. H. & A. W. Reed. According to the poet and publisher Denis Glover, Taylor ‘could interpret with delicate subtlety … that sense of unity which makes a book valid’. Late in his career, under the influence of Russell Clark, he began experimenting with sculpture and carved several pieces in both wood and stone.

Mervyn Taylor died in Wellington Hospital on 7 June 1964, survived by his wife and children. Described by friends as a quiet, unassuming man, he had created an oeuvre which extended well beyond the purely physical number and range of his works. He wanted to be both an artist and a communicator, and his career was a total commitment to these ideals. In addition to his own work he did much to encourage other artists, including Cliff Whiting and Para Matchitt. He had a single-minded devotion to his life as a New Zealand artist and embellished this with the high quality and quantity of his creative output. 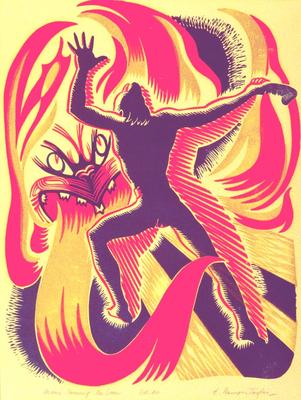 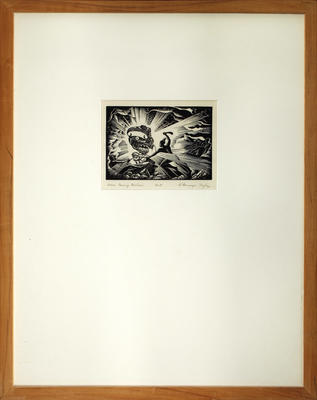 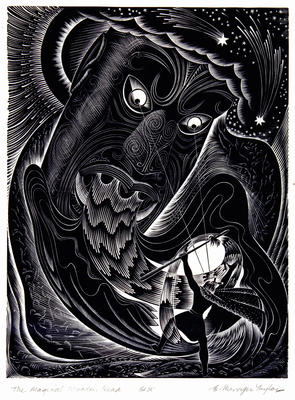 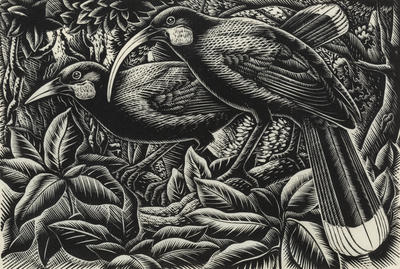 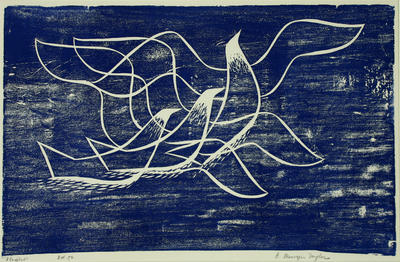 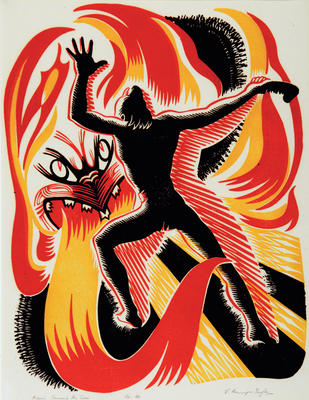 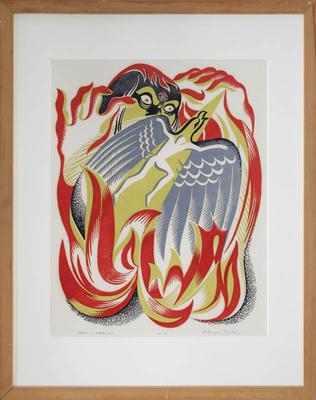